281 is a Full Brother of Rubbellos, Winner SAMDPR. He is the Father of 173 and 178 two Super hens that were imported from Germany. I believe they will make a huge contribution in my loft.

789 Father of 255 Full Brother of the World Famous “Sun City” breeder of 2 x SAMDPR Winners, “Rubbellos,” and “Laura is a big winner today.”

DV 03318 16 1012 “Blue Golden Lady,Mother of 255, also the Grandmother of Thomas 6 Winner of the Golden Algarve Race one of the biggest one loft races in Europe. The Father of Thomas 6 “Blauwe Josef DV 03318 17 154 was bred out of “Josef ” DV 06833 08 197 and “Blue Golden Lady” What makes this mating so special is that Blue Golden Lady was bred out of a son of Josef and a Granddaughter of Josef. In 2018  almost 5000 pigeons participated. The final race from Braganca was held and the pigeons were liberated 505 km from the arrival place in Monte Gordo. Thomas 6 (now at Mike Ganus USA) won by a margin of 24 minutes.

“JOSEF” by Georg Fröhlingsdorf and “GUS” by Dirk de Beer, two names that will go down in the history of German racing pigeon racing! Two breeding birds like there are few. They are fathers, grandfathers, great-grandfathers, maybe even great-great-grandfathers of ace pigeons, two-digit numbers and 1st bankruptcy winners!
“Josef” was bred in 2008. As a racing pigeon, he was one of the best at Georg Fröhlingsdorf. He flies 6 x 1st bankruptcy and 4 x 2nd bankruptcy! He flies a total of 42 prizes with 3,405 ace points! But what he can do better than flying is breeding! In 2014 alone he breeds two birds, the “469” and the “390”, which will be 1st + 20th Ace birds at the federal level in 2015!

The Josef pigeons are sprinter types, rather shorter, but very muscular.
NEWS: A grandson of “JOSEF” wins the biggest ONE LOFT RACE in Europe !! The bird bred by Thomas Kornelius flies out a lead of 24 minutes to 505 km, and this at over 30 degrees and head wind!
He wins € 120,000! “Josef” by Georg Fröhlingsdorf, the “GUS” only developed its true talent on the breeding loft!

Freddy & Jacques Vandenheede has chosen PIPA as exclusive online seller. I bought my Vandenheede Pigeons from Bernhard Banzer an German.

Pipa commented in an article about the Vandenheede Brothers the following, quote ” No other pigeon loft in Belgium can match or even come close the incredible palmares of the Vandenheede Brothers. This team has managed to claim national top results and ace pigeon titles season after season. And it appears there is still a lot to be added to the wonderful success story of this pigeon family.The most celebrated pigeon family at national level – Belgium’s absolute number one. There is no getting around it. Freddy & Jacques have finished in the national top five of the KBDB 24 times, either as national champions or with a national ace pigeon. And that includes 9 x gold, 4 x silver and 4 x bronze:” unquote. They have won 20 National races in 10 years with their Super family of Pigeons. No other loft could achieve this. Super results. 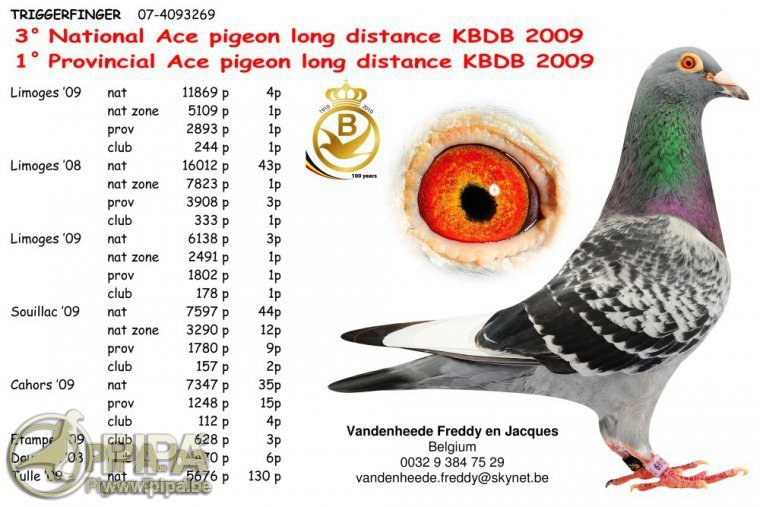 Photos of the pigeons as per pedigree will be added as soon as these pigeons are imported, they are currently in Europe in Quarantine.

Photos and Pedigrees from children and Grandchildren of Purdey to follow.

The Parents of Halover Winner SAMDPR 2014. Halover is now at Mike Ganus in the USA in the stock loft.

DV 8406 17 0810.  (Photo of 0810 will be added as soon as possible) I bought this cock in January 2020 from the breeder Heinz u. Adelgunde Eichert. This cock is still in Europe and will be imported as soon as the Lockdown is removed. This is a product out of two Super families. 0810 Father is a a Full Brother of Second Chance who was placed 2nd at the SAMDPR in 2016 and averaged 12 overall. Also a Full Brother of Amazing Day who in 2017 were 50th on the final SAMDPR and averaged 3rd overall. The Mother of 0810 is a Full Sister of Halover the Winner SAMDPR in 2014. I cannot wait for the cock to arrive from Europe.

DV 8406 19 0254. (Photo of 0810 will be added as soon as possible) I bought this cock also in January 2020 from the breeder Heinz u. Adelgunde Eichert. This cock is also still in Europe and will be imported as soon as the Lockdown is removed. The Father of 0254 was bred from a Full Brother of Halover, Winner SAMDPR 2014 and a Full Sister of Second Chance who was placed 2nd at the SAMDPR in 2016 and averaged 12 overall. Also a Full Brother of Amazing Day who in 2017 were 50th on the final SAMDPR and averaged 3rd overall. The Mother of 0254 is a Full Sister of Halover the Winner SAMDPR in 2014. I cannot wait for the cock to arrive from Europe.

Inbred Halover DV 08406 16 500. I bought this hen on auction from Pipa in 2017. She was bred out of a Full Brother of Halover Winner SAMDPR in 2014 and her Mother is also the Mother of Halover. (Bred from a Mother and Son mating) Due to the Bird flue in 2017 and 2018 we only succeeded to import her in November 2018. I bred this hen with two different cocks in 2019 for the 2020 racing season, but due to the Covert 19 virus I don`t think I will be able to race her children this year. This is quality at its best.

Mother is Mona, Daughter of World famous Vandenabeele cock Bliksem and Frieda, whom were the parents of many many Super racers and Breeders.

Queen of the Sky bred and entered by Ferdie Lubbe at the SAMDPR 2019-2020 season was leading the Hotspot averages after Hotspot 4. She was injured on Hotspot 5 and did not recover fully for the final race. She was bred out of Die Bloue Bliksem (which was on loan at Ferdie) and a hen from Ferdie bred out of a Jan Hooymans cock and a daughter of Rudy. Ring no ZA 15 MOUN 012.

Nadia Mother of Ella and hen of Popeye. Nadia won the club with 5 min 05 sec and Union from Middelburg 755 km. Her children with Popeye may not all be winners but very reliable consistent racers.

Sammy ZA PWF 01103 the Father of Nadia and a number of super money winners in Crusaders club. I won the R5000 ring race in the club 2 years in a row, first with a Granddaughter Ella ZA 15 07316 in 2016 from Noupoort, and then with a Son in 2017 ZA 17 11558 also from Noupoort. Another Son ZA 17 27816 won the Club Breadersstakes first leg from Aliwal Noord in 2018, and a Sister ZA 16 157 were 3rd in both Breaderstakes races from Aliwal Noord and Noupoort in 2017. The first Son from Sammy was ZA 14 0253 which was placed directly to stock. He landed up at the Huysers, they bred from him one round and gave him back to me the following year. The very next week his child won for them and they wanted him back. He ended up with Anton Jonck and bred Super racers for him.

Iris Belg 13 3076814 a Super hen imported from Rik Cools in 2014. She didn’t disappoint, what a pleasure to breed with such a hen. Her children with Sammy won more than R380 000 in 3 years. Not all are winners but all were markers. pigeons that you could rely on. I always knew that I was in for a possible win with their children, even in Crusaders club when they were still the strongest club in Pretoria.

Bart Bliksem, Belg 11 3172400 Bred from a Full Brother and Sister out of Gaby Vandenabeeles Super pair Bliksem and Frieda. Bart with Tina the Daughter of Neptunis bred many good pigeons for me, but the Grandchildren and Great Grandchildren were even better.

Dusty Belg 11 3123590 the Father of Sammy, Bought on a SAMDP Auction. He is not a good handler and I actually first thought he was a hen. But his children and Grandchildren proved to be Super pigeons,

Spikkels Bliksem, Belg 11 3123400, Grandson Bliksem and Frieda. I have neglected over the year to breed more from Spikkels. Gerrit Harmse borrowed him and Tracy Belg 11 3170403 from me. He bred 3 babies from the pair of which 2 won and the 3rd came second. I have mated this pair again on Gerrit request as all three his Daughters were placed on stock.

Besides the above mentioned Gaby Vandenabeele and Rik Cools pigeons I have quite a few more that are very good breeders. They have proven that they are a well developed strain that can be used as a basis to crossbreed with most other proven strains to provide Super racers and Breeders.

“DE GUS” is unfortunately no longer alive. It is therefore not possible to get more offspring from this top sire!